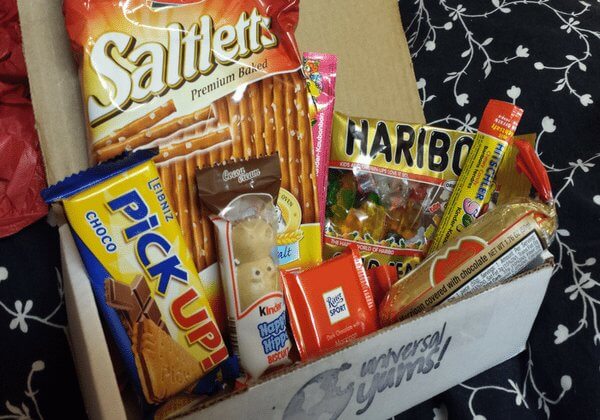 I am a big fan of snacks. Simply put, I'd rather have a snack than a full meal. There's something about just grabbing a handful of something sweet or salty that's just better for being sated, I guess. What I've found, though, is that I get bored with having the same snacks over and over again.

In an attempt to be a little more adventurous, I decided to broaden my horizons with the Universal Yums Box. Promising snacks from across the world, I figured it was a great way to try something new.

While I definitely have my own views on this box, taking a look at how it works and what's inside can help you to determine your own feelings on the matter.

At its heart, this is a snack box. It's not too terribly dissimilar from other boxes that provide subscribers with a whole lot of snacks - it's just got its own particular theme. This one brings you snacks from around the world, giving you a good sampling of the things that people from other country snack upon when they get hungry.

To at least some degree, this box is really as much about the exploration as it is the snacking. As such, each month is themed around a specific country and gives subscribers a fairly wide range of snack items to try out. That doesn't mean that every item is a hit or that every item is all the familiar, but rather that every item is somehow representative of that month's country.

This is, however, just a box of snacks. If you're hoping for something more than that, there are probably other international-flavored boxes that you could try out. If you're interested in a box that has a collection of excellent snacks from around the world, though, you will probably end up being very interested in what the Universal Yums box has to offer.

Perhaps the best thing about this box is that every month's contents are a little different. What you're going to get, though, will always be cool - maybe not your favorite, but always something unique. This is a truly international snack box, one that's going to help you to expand your horizons and try out new snacks.

I've found that the box is a pretty good mix of sweet, savory, and salty. You're definitely going to get candy in these boxes, but you're also going to get crackers and chips in most crates. Given that candy seems to all taste the same after a bit, that's a really good feature.

Since every month is themed after a different country, you'll definitely be getting taste profiles that fit that country's inhabitants. If it's a country that tends to go for the sour or the salty, that's what you're going to end up getting in your box. This unfortunately means that you might not always get your favorite taste profiles every month, but you will always get something interesting.

The boxes also include a nice little trivia packet, which is a fun but forgettable addition to the box. It's not something that you necessarily need, but it will help you to learn a little more about the country from which all of your snacks have come. It's a neat little extra for those who love trivia, but it is not necessarily the sort of thing for which you buy the box. Just consider it a bit of filler that you can use to pass the time or - more likely - use to sound a little more worldly in front of your friends and family.

The value proposition here is a lot harder to pin down than it is with most subscription boxes, simply because all of the snacks are international. It's certainly cheaper to get one of these boxes than to get any of the individual snacks shipped internationally, but it's hard to say that the box itself is actually worth more than the price of each individual snack in that snack's home country.

If you're looking for value, though, the Super Yum box is definitely the best. At about $1.75 per item, you stand a much better chance of getting a good deal. All the boxes are great, however, and do represent a unique way to get items a little more cheaply than having them shipped on their own.

If nothing else, the Universal Yum Box is a lot of fun. It's a great way to try out new snacks, even if not every snack is going to end up being your favorite. It's a great feeling to get a big box full of snacks every month, and it's even more fun to know that you're trying out something that most of your friends and neighbors have never purchased before. If you are an adventurous snacker, I definitely recommend that you try out this box.