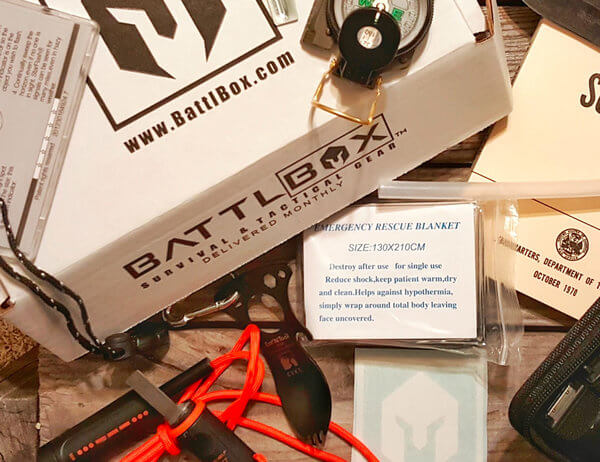 One of the most frustrating things about trying to be prepared forBattlBoxBattlBox emergencies is how hard it is to be taken seriously. There are a ton of 'survivalist' products out there, but the vast majority of them feel like they're meant to give people an excuse to wear camo out of season.

BattlBox, however, has always seemed like it was seriously about survival. One of the best-known survival boxes out there, it boasts an amazing array of options and provides its subscribers with tools for real emergencies.

I took a look at this box to see how it stood up to my needs. What I discovered, however, was a box that was much better than I could have anticipated. If

The BattlBox positions itself as a serious box for serious survivalists, and it's largely successful in that effort. Unlike most other boxes out there, this doesn't really seem to be for those who dabble - it's always full of equipment that has real-world uses.

What you're getting here is a box that's meant for people who are preparing for emergency situations. What that situation might be varies from month to month, but it's always serious and it always requires specialized tools. If you're looking into BattlBox, then, it's because you always want to be prepared.

BattlBox is a serious box for those who are serious about survival. Every month has a different theme, which the company calls a Mission. Every mission is themed around a specific real-life survival event - everything from natural disasters to active shooter responses. The items included, as you might imagine, are meant to work for that mission.

There are four levels of boxes, so what you're going to get really depends on how much you're willing to spend. As with most subscription services, the higher-tiered boxes include everything that's in the lower tiers as well as a few extras.

As you go up in price, you also go up in the size of the gear. Radios, lights, and other electrical gear are pretty common in the boxes, as are hiking gear and even binoculars. Generally speaking, you'll get a good mix of both new and well-known brands in this section.

If you go for the biggest subscriptions, however, you're going to start seeing things that you just don't see in subscription boxes. You'll get tents, sleeping bags, full survival kits - it's the stuff that you'd use to make a serious bug out kit or stock a basic cache in every box.

What's cool about the highest tier is that you're not necessarily adding bigger items, but you're adding better survival items. The top tier features things like hatchets and knives from well-known companies, as well as the kind of survival gear for which you would expect to pay a premium.

How Much Does BattleBox Cost?

BattlBox has more tiers of subscription that virtually any other box on the market, and that means more price points. The basic box isn't cheap - it runs $29.99 per month, and that doesn't include tax or shipping fees. A step above that is the Advanced box, which costs $59.99 plus shipping.

In terms of sheer value, though, this box is out of this world. Every month's box is easily worth double the cost, with the bigger boxes actually representing amazing values. It's not uncommon to see the difference between Pro and Pro Plus coming down to a knife that's worth more than a hundred bucks. These boxes are, simply put, an excellent deal for anyone who wants to gather a good cache of survival equipment or who wants to try out the latest survival gear on the market.

The most unique thing about this box is that it always includes documentation. There are videos available for almost every item included in each mission, so you can actually learn how to use them before an emergency occurs. It's really hard to overstate how great of a feature this is, especially since everything in the box really is meant to be used when and if emergencies occur.

If you're a true survivalist, you'll fall in love with this box. Though BattlBox certainly isn't cheap by any stretch of the imagination, you'll get the items you need and the information you need to use them. The items included aren't toys, though, so don't expect to use everything all at once.

If your goal is to build up a cache or to make sure that your bugout bag is full, you'll get everything you need here. It's definitely worth it to spring for the bigger subscriptions, though, as they tend to have even better items. Even if you're only going to go with the basic level, you'll still wind up with some excellent gear. Give this box a try.